LAS VEGAS, NV. October, 2013 – AB Centric, R&D, a Nevada-based Research and Development Corporation, announced this week it has developed a wearable non drug “energy patch” that can balance the ‘human energy field’ to ease the symptoms of motion sickness, vertigo and jet lag.

Up until now, traditional transdermal (skin) patches were available, which contains small amounts of scopolamine, a drug that is also known as ‘The Devil’s Breath,’ and is derived from a particular type of tree common in Colombia called the Borrachero tree. Scopolamine is known for its use to erase memory and render you incapable of exercising free will. Its properties suppress the body’s balancing mechanisms, which often cause children and the elderly, in particular, to react badly to the chemicals in the patch. Children, for example, can become hyperactive as a result of wearing the transdermal patch. And in older adults, the medicine can cause severe confusion, memory loss and conjure up strange dreams.

The Motion Sickness patch is a “non-transdermal”, no medication (skin) patch that uses an energetic exchange that promotes the balance of inner ear activity, therefore no chemical effects. Motion sickness is believed to occur when this balancing system gets overwhelmed by contradictory messages sent from the eyes and inner ears. The resulting symptoms of motion sickness can include sweating, light-headedness, hyperventilation, nausea, vomiting and anxiety. 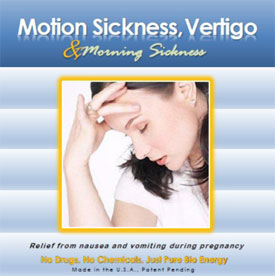 The Motion Sickness patch is infused with energetic frequencies to influence the human auric field that counter acts the physical effects from motion sickness, vertigo and all their related issues. This “energy field” surrounds all life forms – and when fully functional, this field is far reaching. In fact, it can be influenced by this patch, similar to the techniques of acupuncture. When stimulated, energy flows through pathways known as (meridians). This stimulation activities your body’s ability to improve inner ear balance.

AB Centric, R&D, established in 2002 is known for its use of a special material that is sensitive to (RF) radio frequencies. This material is bonded to a non-latex woven medical pad manufactured by 3M Company. The substrate material on top of the pad is then transformed by Infusion Technology, adding digital information onto the material.