Our skin is constantly exposed to harsh environmental airborne toxins, including bacteria, fungus and carcinogens from factories and automobile exhaust, as well as tons of other harmful gases that are all around us causing irreversible damage to our face.

NEU FACE™ is not a medication, but rather a blend of natural organic healing ingredients that once you spray on your face, your face becomes revitalized and you feel refreshed immediately.

This product is a perfect companion to take with you wherever you travel or spend time such as the office, vehicles, plane or home. NEU FACE™ is a “super healing moisturizer” with natural ingredients that turn back the clock on aging and makes you feel refreshed and rejuvenated.

One of the natural ingredients is certified organic Vetiver essential oil, that is known for its natural healing ability. This gives you the natural advantage to help with acne, abrasions, oily skin, wounds. This product can be used on men’s faces from razor burns and small cuts because of its antiseptic properties. It can also be used as a hand sanitizer and moisturizer. 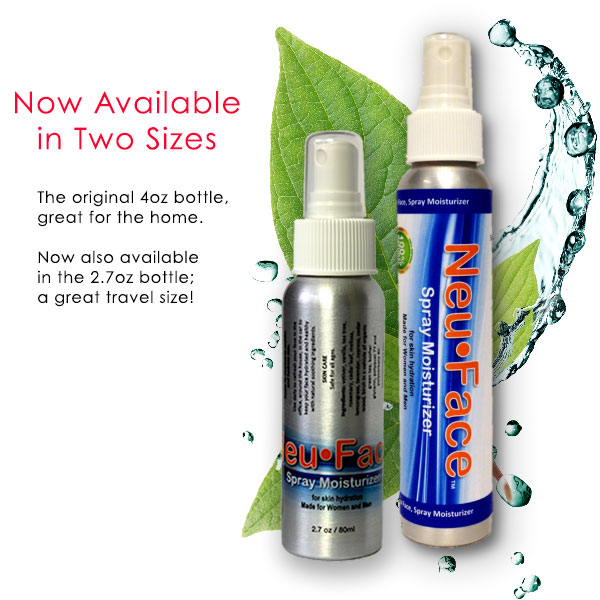 Other essential oil ingredients like, Lemongrass, Cypress and Mellissa can help to pacify people who have suffered a serious shock, trauma, or major setback in their life. It improves calming and thereby stabilizes emotions.

Of all the organs in the human body, our skin is the largest. And It’s vulnerable to airborne bacteria’s and environmental toxins, which can cause damage to our skin, especially our face. Microbes on your skin are described as “nonpathogenic”. They exhibit limited growth on the epithelial surface, while other microbes can invade and have the potential to reach levels of unrestrained growth are defined as “pathogenic”. The majority of the microorganisms that live in the epidermis live in its most superficial layer, known as the stratum corneum, these eight-legged arachnid feed off your facial oil, while there are certain species of bacteria that reside in the more secluded areas of follicular canals.

Our body is a collection of microbes, fungi, viruses ─ right now, in the general vicinity of your nose, there are at least two species of microscopic mites living in your pores. You would expect scientists to know quite a lot about these animals (given that we share our faces with them) but they don’t. 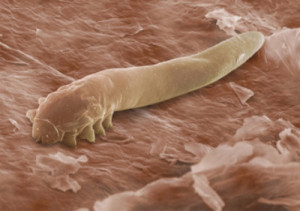 Here is what we do know: Demodex mites are microscopic arachnids (relatives of spiders and ticks) that live in and on the skin of mammals – including humans. They have been found on every mammal species where we’ve looked for them, except the platypus and their odd egg-laying relatives.

Demodex mites live in hair follicles and sebaceous (oil) glands on the skin. Sometimes they are known as eyelash mites. Both species are primarily found on the face near the nose, the eyebrows and eyelashes. They also occur elsewhere on the body, such as around the ears, on the scalp, and in skin folds.

Demodex folliculorum mites live in the hair follicles. The adult mites are between 0.3 mm and 0.4 mm long, with a semi-transparent body. You can see fully grown adults with the naked eye, but a microscope is useful for a more reliable examination.

Demodex live in the sebaceous glands connected to hair follicles. The adult mites are up to 0.2 mm long, with a semi-transparent body. You need a microscope to examine a plucked hair or thick oil squeezed from a gland to check for infestation.

The emotional benefits are matched with the health benefits from today’s demands on our environment. Finding a simple solution is at your fingertips, by misting your face 4 to 6 times a day. NEU FACE™ is a healthy way to add moisture and hydration to your skin everyday to rejuvenate and sanitize your face. There are several active ingredients in NEU FACE™ that are known for their aromatherapy properties that aid in calming stress and anxiety, thereby stabilizing emotions.

Before venturing into this skincare product, we interviewed several different compounding companies and selected one Company that passed our standards for high quality and who had access to natural organic resources.

High Integrity and devotion to details to produce a state-of-the-art non-drug, skincare product are important factors, and since we’ve devoted our business to this ideological mindset, we are proud to disclose our ingredient list.

Vanilla: is a natural antioxidant and gives vanilla beans their distinctive aroma. A study published in a 2011 issue of the “European Journal of Pharmacology” found that as a result of the vanillin content, vanilla extract had powerful anti-inflammatory abilities. It also protects your body from damage from harmful components, such as free radicals and toxins.

Rosemary: is hailed since ancient times for its medicinal properties. Rosemary was traditionally used to help alleviate muscle pain, improve memory, boost the immune and circulatory system, and is known for its antioxidants and anti-inflammatory effects.

Mellissa: is a plant native to the Mediterranean Region and has been popularly referred to as the Bee Plant, the reason being obvious. The health benefits of Melissa can be attributed to its properties as an antidepressant, cordial, nervine, emmenagogue, sedative, antispasmodic, stomachic, antibacterial, carminative, diaphoretic, febrifuge, hypotensive, sudorific and tonic substance.

Lemongrass: offers a wide array of medicinal benefits and is in extensive demand due to its antibacterial, anti-fungal and antimicrobial properties. It is also used in aromatherapy and helps to combat fatigue, anxiety.

Lavender: Lavender is well regarded for its skin healing properties. It’s effectiveness in treating burns without scarring. It’s also a remedy for scalds, burns, and sunburns. Lavender on its own is a relaxing and sedative aroma and has an almost immediate effect as soon as it hits the sensitive membranes inside your nose. Lavender is amazing in its extensive positive benefits on mind, spirit, and body. Lavender is the first oil in any collection for aromatherapy and is one of the few essential oils that are gentle enough to apply directly on the skin.

Cypress: makes your skin, muscles and hair follicles contract and prevents hair from falling out, while tightening up loose skin. It also induces a calming, relaxing and sedative effect on both the mind and body by relieving nervous stress and anxiety. It also stimulates a happy feeling in case of anger or sadness. This property can be helpful to pacify people who have suffered a serious shock, trauma, or major setback in life.

Cedar Wood: prevents wounds from becoming septic as well as protecting them from tetanus germs. It can safely be applied externally on wounds as an antiseptic, and it is even used as an ingredient in herbal antiseptic creams. By defending the body against toxins, the cedar wood relieves the white blood cells and immune system of the extra stress, which allows them to better protect internal functions.

Kosher Glycerin: works to moisturize the skin by drawing water from the air into the skin’s outer layer. It also forms a protective layer that helps prevent moisture loss. Glycerin has been shown to provide a protective barrier, helping the skin cells mature properly and aid bruised and swollen skin. Glycerin helps degrade the corneodesmosomes that hold skin cells together. The end effect of this degradation is more consistent desquamation (shedding of the outer layer of skin) and ultimately you get smoother-looking skin.

Polysorbate 80: is used as a solubilizing agent, acts as a surfactant that lowers the surface tension (or interfacial tension) between two liquids or between a liquid and a solid. Surfactants may act as wetting agents, emulsifiers, foaming agents, and dispersants.